Static Analysis only - Limited to a fixed conveyor capacity of 77 tonnes per hour, 777 or 7777 tonnes per hour. It is also limited to a maximum of 30 day's use. Most other functions are functional. Free download to all, but remains licenced to Helix Technologies.

Static Analysis only. Limited to a maximum conveyor capacity of 1000 tonnes per hour and only one drive pulley allowed in system. No Horizontal Curve design.

Static Analysis only. Unlimited - may have any conveyor capacity, any number of conveyor sections or flights, any number of drives and pulleys, any number of loading hoppers etc. The Professional Version is suitable for designing large capacity and overland conveyors and includes Horizontal curves.

Static and Dynamic Analysis. This version of the Helix delta-T Conveyor Design Program has all the features of the Professional version plus a very powerful Dynamic Analysis section which performs 'Flexible Body' dynamic calculations of the conveyor. The designer can model what happens during the starting and stopping of the conveyor. It provides detailed graphical output of the Belt Velocities, Belt Tensions, Takeup movement etc. at any point along the conveyor during starting or stopping and under different load conditions.

In addition there are Registration Code versions or USB Dongle key version of each of the above. 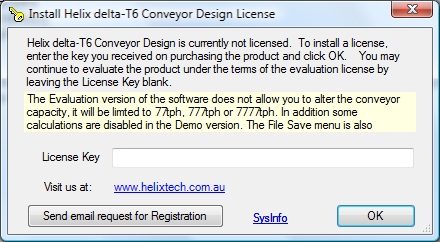 This version is normally supplied locally in Australia only. The USB dongle version can be installed on a computer after internet download or from CD ROM disc. This version requires a special USB Dongle key from Helix Technologies to be plugged into a USB port on the computer where you want to use the delta-T6 program.

When you run the program it will check for a valid dongle and run if one is found or exit if the dongle is not present.

This dongle version can be installed on network server computer with a program shortcut installed on the work station PC's on the network and the program can then be run by clicking the shortcut, provided that the dongle is present on the workstation PC.

Prices of the multiple user Network version depends on the number of licenses and the mix of Dynamic, Professional and Standard versions of the program. Please contact sales@helixtech.com.au for pricing.