The Helix delta-T6 Conveyor Design program has the ability to design Pipe Conveyors. In a Pipe Conveyor, the belt is formed into a circular tube which fully encloses the conveyed material. The conveyor belt is an open trough under the loading chute and it is trained and formed into an enclosed tube for the length of the conveyor until it is once again opened to a troughed shape at the discharge pulley.

In Helix delta-T6 a Pipe Conveyor is denoted by selecting or inputting 6 Roll Idlers and a 360 degree Troughing Angle.

A typical Pipe Conveyor cross-sectional view. The belt is formed into a tubular shape by 6 idler rollers.

The above methods have been successfully used to design many thousands of conventional troughed conveyors by Helix users in more than 30 countries.

The VISCO method is considered to be the most flexible and most accurate method of estimating the conveyor resistance because it allows the user to adjust multiple input values for different types of equipment which all affect the total conveyor resistance. For Example:

The above main resistances are all influenced by the load per m on the belt, the belt speed V, the idler spacing, the number of rollers, the idler roll diameter, belt top and bottom cover rubber properties (indentation hysteresis losses), the current belt tension which affects the amount of belt sag and resulting material and belt flexure losses, the accuracy of the idler vertical and horizontal alignment.

In the Helix delta-T program, the user can adjust all of these parameters and see the effects on the conveyor. A Sensitivity Analysis can be performed to arrive at an optimised conveyor design which will have the lowest total cost of ownership i.e capital, maintenance and operating cost.

The resistance of a Pipe Conveyor may also be broken down into four main categories, namely:

In a Pipe Conveyor, the folded belt adds additional load on the idler rolls imparted by the stiffness of the belt. There are also more idler rollers (normally 6 for Pipe Conveyor vs 3 for a Troughed Conveyor) and more idler face length is in contact with the belt.
The gravitational force resulting from the mass of the material and belt is taken on the three lower idlers, as it is in a conventional troughed belt.
The upper two wing rollers and the top centre roller also have indentation losses due to the folding of the stiff belt into a tubular shape.
There is also a resultant force on the lower three rollers due to the belt tension in a Convex vertical curve.
In a Concave vertical curve, there is a resultant force applied to the three upper rollers due the belt tension.
In addition, the wing rollers (the two on each side of tube) must also take the resultant force due to the tensioned belt being curved around Horizontal curves.

The belt to idler indentation forces in a Pipe Conveyor may be summarised as follows:

In the Helix delta-T6 program, when you perform a Pipe Conveyor calculation, all of these individual indentation losses are calculated for each section of the conveyor and added to arrive an equivalent friction factor f for indentation resistance.

The user can see the resulting proportion of conveyor resistance attributed to Indentation, Flexure, Rolling Resistance and Belt Scuffing in the Viscoelastic Friction Factor Report.

In a Pipe Conveyor, as well as a Troughed Conveyor, the belt will tend to sag down to some extent between supporting idlers under gravitational forces induced by the material and belt mass. 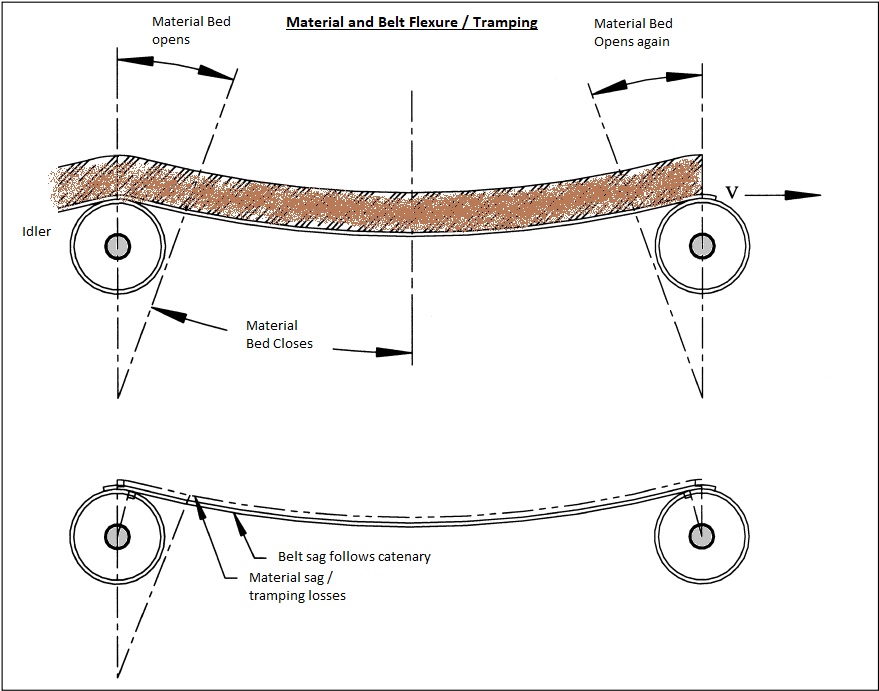 The pipe tube will also tend to bulge slightly between idler stations and there is a resulting resistance loss due the flexure of the material and belt as it deforms in travelling from one idler station to the next. The total material and belt flexure loss is a function of the belt tension, the amount of belt sag, the resistance of the material moving / shearing (internal co-efficient of friction of the material) and amount of belt flexure resistance due to its stiffness. Estimating this flexure loss is performed as described in the Belt and Material Flexure Calculation help topic in the Helix delta-T6 Program.

To adjust the amount of resistance due to belt and material flexure you need to adjust the Material Flexure Adjustment Factor input value on the Viscoelastic Belt Properties Input Form. The default input value is set to 1.0 and this is the setting required for Iron Ore. You need to adjust this input value to reflect the relative internal co-efficient of friction of the material being transported. For example, if it is say dry Wheat, use a factor of 0.8 or even 0.7, and if the material is very hard, sharp angular ore or rock, use a value of say 1.1 or 1.2. The amount of flexure also depends on the amount of belt sag and also the troughing angle of the Idlers, the sag is calculated automatically and adjusted for each section.

If the idler rolls are not aligned perpendicular to the belt travel direction, a scuffing resistance results. The magnitude of this scuffing resistance depends on the amount of misalignment as well as the co-efficient of friction between the belt and idler roll. The co-efficient of friction will in turn depend on whether the belt surface is dry, wet or moist.

The following report shows the values of each component of the conveyor resistances.

You can see from the above report that in the carry sections of the Pipe Conveyor, the total friction factor varies in sections with no horizontal curves and increases in the curved sections. (increases from 0.0247 in section 4 with no horizontal curve to 0.0322 in section 5 with 300m radius horizontal curve)
On the return belt sections from 26 onwards, the friction factor is higher than carry sections at about 0.045 to 0.056; However, this does not mean the section resistance is higher in the return run because the mass is much lower as there is no material being transported.

Resistance R is lower on the return belt even though μ is higher because m is much lower.

In the report shown above you can see the proportions of the resistances as a percentage of the total for each section:
Carry side (Section 11)

Corresponding Return side (Section 29) It is clear that there is lower Flexure loss on the return run (no material) and the additional idlers make the Idler drag losses proportionally higher on the return side than on the carry side.
Indentation losses are lower on the return run than the carry side due to no material mass. The proportions of each resistance component can vary widely depending on the belt rubber properties, belt speed, idler spacing and idler rim drag. The designer should explore different settings to get an optimal design.

Steps for Design of a Pipe Conveyor

In Helix delta-T6 a Pipe Conveyor is denoted by selecting or inputting 6 Roll Idlers and a 360 degree Troughing Angle. 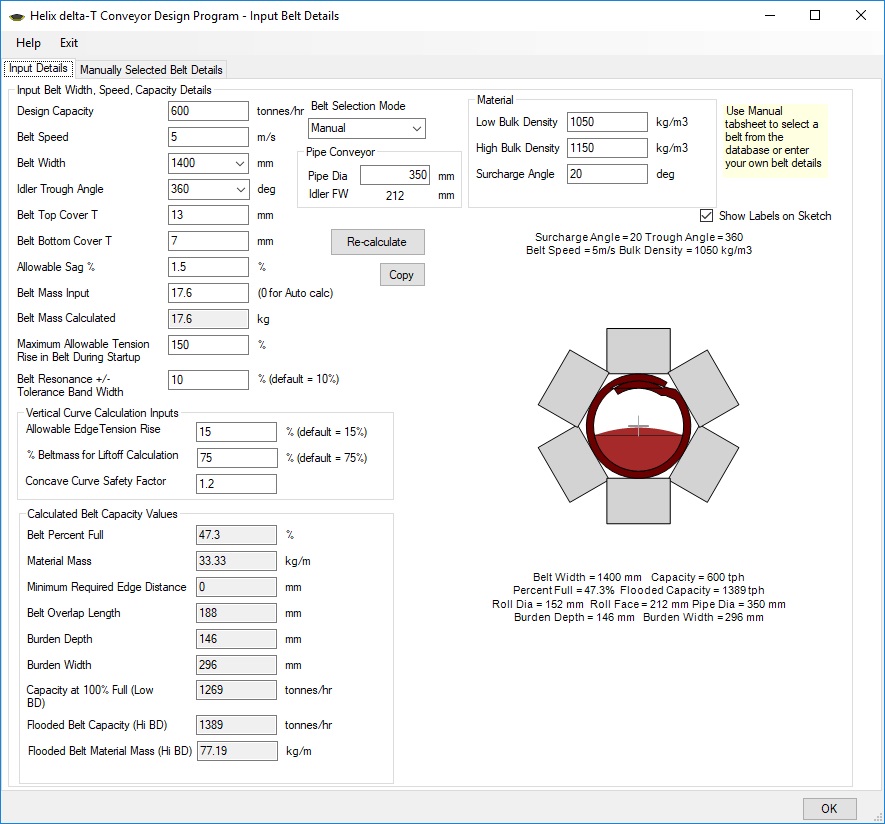 The Maximum Belt speed will depend on the Idler Load and Bearing life and should be adjusted to give an idler rotation speed of less than 600 rpm.

Pipe Conveyors have some additional features compared to conventional troughed conveyors, i.e the belt has to be formed into a tube after the loading point and it also has to be opened from tube to flat at the discharge pulley. These sections of the belt are called transitions; they are similar to the Trough Transition in a conventional Troughed belt conveyor, except that the edge length (hypotenuse) is longer as the belt goes from flat at the pulley to more than 360 degrees of closure.

The required minimum length of the transition is governed by limiting the edge tension rise and also limiting the center tension drop which results for the edges being stretched.

The Pipe Conveyor Curve Calculations must be performed for each Vertical and Horizontal curve in the pipe conveyor.

Design of curves for a Pipe Conveyor

One the main advantages of Pipe Conveyors is that they can negotiate relatively small radius Horizontal curves when compared to conventional Troughed conveyors. Each vertical and horizontal curve in a Pipe Conveyor needs to be checked for:

The required minimum concave curve radius for belt lift off for Item no. 3 above is calculated as it is for Troughed conveyors and is shown in the Vertical Curves Report.

For each Concave and Convex vertical curve and each Horizontal Curve in a Pipe a Conveyor, the Calculate Pipe Conveyor Curve calculation under the main form Calcs menu must be used to check for high and low tensions in the curve. Refer to the Calcs menu shown below. 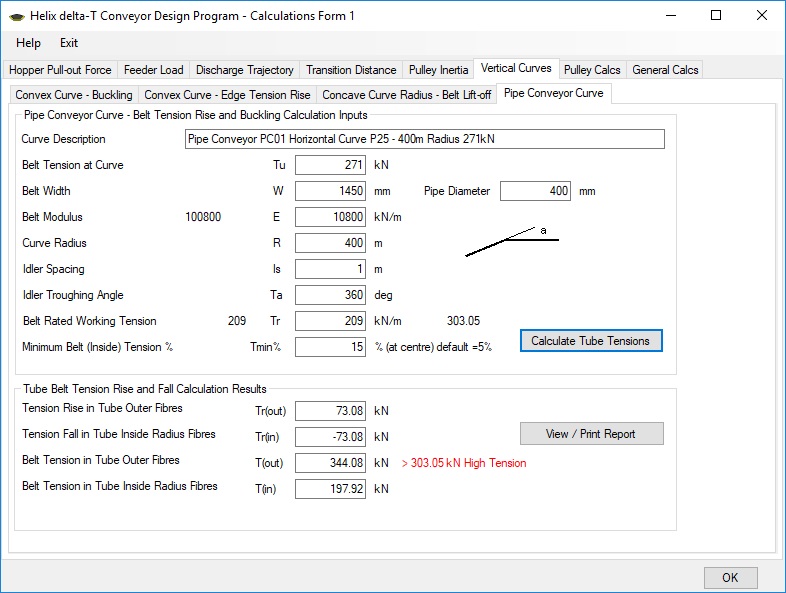 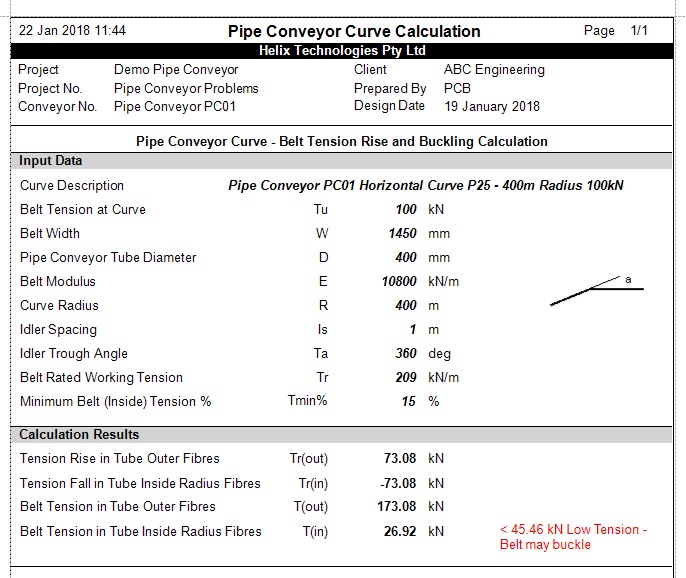 Tension at inside of curve is below the minimum required tension of 15% of belt rated tension. (The 15% value is a design input value, a minimum of at least 5% is recommended)

Tension at outside of curve is above the rated tension of the belt.