This conveyor is loaded evenly at the tail end but due to idler and belt resonance the material becomes bunched up. This occurs at certain belt speeds, idler spacings, conveyor load and belt tensions. Helix delta-T6 can calculate whether there will be belt resonance like this on conveyor sections and if present then you can alter the design to ensure this bunching and severe structural vibration does not occur on your conveyor.

What is Belt Resonance?

The tensioned belt supported by the idlers may be modelled as a simply supported plate. This belt has an inherent natural frequency dependent on the span between idlers, mass of belt and material if present and the tension in the belt (similar to a guitar string). The rotating idler roll also has a natural frequency induced by its eccentricity. If the natural frequency of the belt and the rotating idler coincide, resonance occurs. This resonance can have a damaging effect on the idler rolls, bearings and the conveyor structure itself and should be avoided by altering either the idler spacing, belt speed, mass of belt or belt tension.

Apart from damage to conveyor equipment, the resonance can cause material bunching as shown in the video above. This has a detrimental effect on the operation of the plant and apart from causing vibration it can induce blockages and affect the flow through transfer chutes and the loading on downsteam conveyors. Also, material spillage is a major problem. 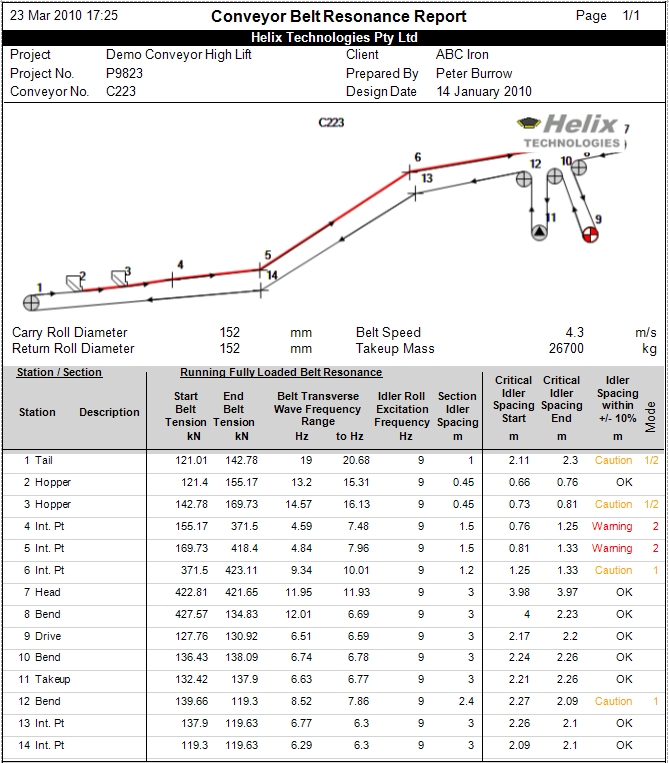 The Tension at the beginning and end of each conveyor section is used to calculate the belt sag and then the Belt Transverse wave frequency, resulting in a range of frequencies for the conveyor section. This range is compared to the Idler Roll excitation frequency.

You can adjust the band width of the resonance calculations. In earlier versions of the Helix program the band width was fixed to +/- 10% but now you can input the tolerance to use for the warnings. For example for more accuracy use a value say 2%. This will only warn you if the belt frequency and the idler frequency are within +/- 2%. This input value is on the Input Belt Details input form.

The sample report shown above shows the calculated values for the Belt Transverse Wave frequency range and the Idler Roll excitation frequencies. If these two frequencies, or multiples of the frequencies, fall within plus or minus 10% of each other a warning flag is raised in the last column of the report. The second last column shows the critical idler spacing for the first mode, ie when n=1.

Usually, the carry side of the belt will be loaded and the mass of material will have a significant damping effect on the belt transverse wave amplitude.

The tensions used are for the conveyor running fully loaded, as this is mode in which the conveyor will be operated for most of the time. You can change the load on each section if required.

Avoid the Warning 2 and 3 cases

Helix Technologies have observed the behaviour of many conveyors and we have come to recognise that the belt flap case to avoid is the one with the mode 2 or 3 warning. In this case the belt transverse wave frequency is half the idler rotation frequency and this is the case which causes the material to bunch up on the belt inducing increasing vibrations which in turn cause more material to bunch up and so on. See picture of material bunching below and video above.

In order to prevent the resonance occurring it is recommended that the idler spacing be changed to random spacing. This moves the Belt Frequency as the spacing changes and so does not allow resonance to build up.